You are here: Home / Personalities & Staff

Meet the On-Air Personalities
and the behind-the-scenes Staff!
CLICK ON NAME FOR BIO

My job involves On-Air  weekday mornings 630am-10am and Saturday 6am-Noon., Production Director, Chief Engineer, Technical Director, ITT, & Assistant Program Director
I was born and raised in the Houston area and dreamt of becoming a DJ since I was 7 years old when I got a little reel-to-reel tape recorder. I played “DJ” for hours and hours.
Although I was raised in church, I did not accept Jesus as Savior until my senior year in high school. After graduation, I moved to San Augustine and enrolled at Stephen F. Austin State University. After spending one semester at SFA I felt the call to ministry and transferred to Jacksonville Baptist College in Texas.
Presently I live in San Augustine with the love of my life, my wife Linda, whom I married in 1979. 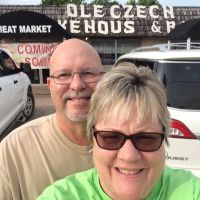 We have two grown daughters and five grandchildren.

We both pastor CrossRoads Christian Center Church, where I also play the guitar and lead worship. Linda and I both love Geocaching. I also do a daily blog based on reading the Bible called Morning Thought 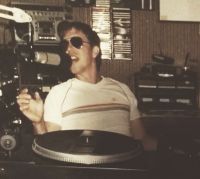 I started with KSWP in 1986 as a volunteer installing a telephone system, slowly working myself on-the-air, then into production, and engineering. I volunteered for nine years before becoming part of the full-time staff.

Michelle is On-Air weekday evenings 7:30 pm-Midnight. She is the Program & Music Director and oversees the Production & Promotions Departments. Michelle is married to Al (above).

God began changing my life as a child. My first memories of Him continue to be what my reality is today, a simple understanding of the deep, inconceivable truth that He loves me.
I am: fourth of six children, wife of Mark, mom of 4 amazing kids, local radio personality, hiring manager, director of Mission NAC, SFA graduate in Journalism, Radio/Television, Kinesiology. (I know! I couldn’t make up my mind!)
I have been: a former national radio news anchor, teacher, public relations director, coach, collegiate ball player.
My greatest adventure: Being a wife and mom!
I always thought I would be: A foreign missionary!
Favorite ministries: KSWP & KAVX, personally disciplining young women, Mission NAC!
My favorite things to do: Travel, read, sports (Participate! Not watch!)
Listen to Tiki weekday afternoons from 3pm-7pm and weekends Noon-6pm.

Connie originally volunteered for KSWP in the 1980’s as a teen. After graduation she eventually moved to Nashville, Tenn and worked in the music industry. Now she’s back in the office and on the air.

Becky is currently heard on- air on KAVX Weekends from 6 a.m. to noon. She also fills in on other weekend shifts when needed.
She began as a volunteer on-air personality for nearly two years in 1995.
After leaving the East Texas area for nearly 20 years, God provided an opportunity for her to return to KSWP and she loves being a part of the ministry!
Becky grew up and graduated from high school in Lufkin. She received her Education degree from SFA and teaching in private and public schools for over 20 years. She is currently a Reading Intervention teacher.
Becky made a public profession to Christ through believer’s baptism at 24 years old, after having been raised in church and being confirmed as a teenager. “I grew to see that I needed to be sure I’d made the decision myself and I needed to discover God was available to me on a personal level.”
Becky married her husband Steve in 1992 and they have 3 children – 2 sons and a daughter.
She is happy to share how God grew their family through adoption and help others struggling with being able to start a family.
Becky enjoys shopping, crafting, and any activities with her family.
One of her favorite things is sharing God’s word and love through on-air ministry!

Mrs. Smith has lived in East Texas since 1982 and is married with 3 grown children.
She attended a Texas Education Agency Accredited Business College from which she graduated in 1990.
She has worked for KSWP/KAVX since 2014.
“Of all accounting jobs, KSWP/KAVX has been the most gratifying in that I can pray with and for people”.

She’s the voice you hear on the phone and the first person you see walking in the office. She’s not that mysterious. It’s Ms. Parker!

Ms. Parker was born in West Texas and has lived most of her life in East Texas. Started working at KSWP/KAVX Nov. 2013. She is a loving mother and grandmother, she is preceded in death by her niece, mother, and father… oh this is a bio, not an obit.
Just a few things she does around the station are; answer the phones, manage the 90.9 KSWP & 91.9 KAVX emails, and the AMEN prayer page, enter all the events submitted onto the KSWP & KAVX online event pages, coding accounts, traffic manager and Administrative Assistant.
May the grace of the Lord Jesus Christ, and the love of God, and the fellowship of the Holy Spirit be with you all. 2 Corinthians 13:14

Vicki has been a member of the KSWP/KAVX team since 1999.
She is a native Houstonian, but moved to Lufkin with her husband in 1990. Vicki and Milton married in 1980, and are blessed with 2 daughters, 2 son-in-laws, and 2 granddaughters.
Although she was raised in church her whole life, she didn’t trust Christ as her Saviour until the age of 15.
She most enjoys spending time with her family, especially her 2 precious granddaughters.
You may not see her in the light, but she is always busy behind the scenes maintaining the donor database and is often found talking with someone about their gift and updating information, as the Partner Management Coordinator.

Joshua is a Programming Assistant. He was born in Lufkin and has lived his entire life in East Texas. He has been working for KSWP/KAVX since August 2004, when he started as a volunteer during his senior year of high school.
Originally planning on going to Tennessee to attend university, he decided to stay closer to home and was hired as a programming assistant while he obtained his Bachelor of Business Administration in Marketing at Stephen F. Austin State University. After graduating, he spent six weeks traveling in Greece, Albania, and Kosovo. Today, when he’s not working, it’s a good chance you’ll find him listening to music, reading a book, or exploring Google Earth and Wikipedia for places to travel to in the future.
As a Programming Assistant, Josh creates the daily program logs used on both stations to play music and programs. He also listens and edits all the music you hear.

Share the Hope of Christ,
Connect You to a real & loving God,
Serve Others by being real.

Bible verse of the day

I will sing to the LORD all my life; I will sing praise to my God as long as I live.
Psalm 104:33
DailyVerses.net

Serve Others in Real Ways

The KAVX mission challenges you and the ministry to “Serve others in Real Ways”. You are limited not by your abilities but by your vision. … END_OF_DOCUMENT_TOKEN_TO_BE_REPLACED